The Many Drone Detection Options

There are many drone detection and counter drone systems available in the marketplace.  Some operate independently, and others utilise a number of integrated technologies. Not all capabilities are available for domestic environments due to legislative challenges such as the use of jammers and destructive outcomes such as kinetic systems. Some of the common drone detection, counter drone, and integrated solutions on the market are discussed below.

For a holistic approach, including supporting shared airspace, safety, security and accountability concerns, and emerging regulations worldwide will require all RPA to be identified remotely by electronic means in combination with a RPA registration database. The principle of electronic identification (eID) is that a cooperative RPA regularly broadcasts a unique identifier, such as a registration number, together with its current position to enable authorised parties to detect, identify, locate and track the RPA anywhere at any time.  The FAA and European Union are in the process of creating standards to regulate the requirements for remote identification.  Once regulated, RPA manufacturers will be required to meet these requirements, but a complete solution is some years away.  As an interim solution, there is a suggestion that the FAA will ask RPA manufactures to voluntarily install remote identification whilst standards and regulations are formalised. Whilst Australia is introducing a national RPA registration scheme, it does not appear that remote identification on its current radar and many suspect it may well adopt the FAA and EU solution.  As a solution, DJI has proposed the use of a Wi-Fi beacon that broadcasts the required information to authorised users in the localised area.  The authorised user, which could include law enforcement and airport operators, could receive this information through a smartphone application of RPA operating in the localised area. There is also a discussion whether the beacon should networked (sim card) so that it’s not a localised system and authorised users, such as the police, can see RPA operating outside the localised area.

The DJI Aeroscope RPA detection system is one example of an existing remote identification system where authorised users can detect and track all DJI manufactured RPA. In fact the information displayed available includes the RPA type, serial number, location, altitude, distance and speed and in many instances the location of the controller. The DJI Aeroscope can do this because DJI owns the communication protocol of its RPA and the Aeroscope system is simply listening for that protocol.  However, this is a not total solution as DJI are not the only manufacturer of RPA and only limited organisations have access to the Aeroscope system. In Australasia, DJI estimates it occupies 80% of the RPA market which means 20% is not detected. 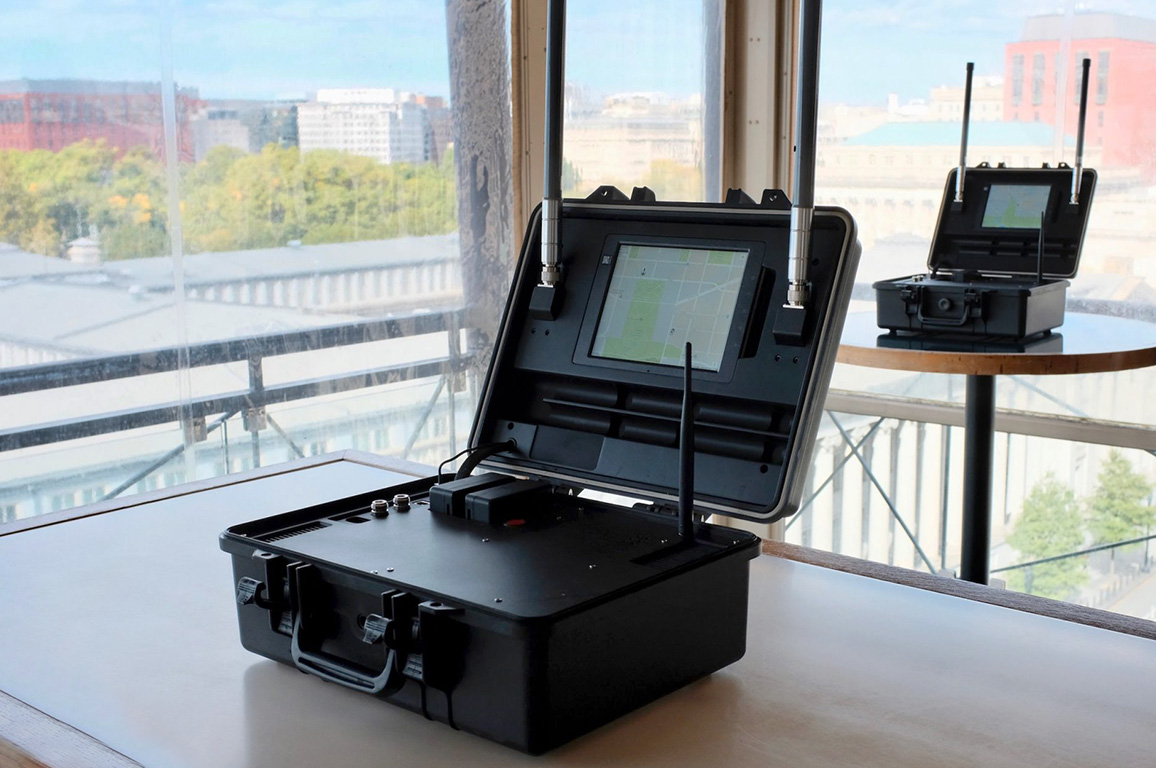 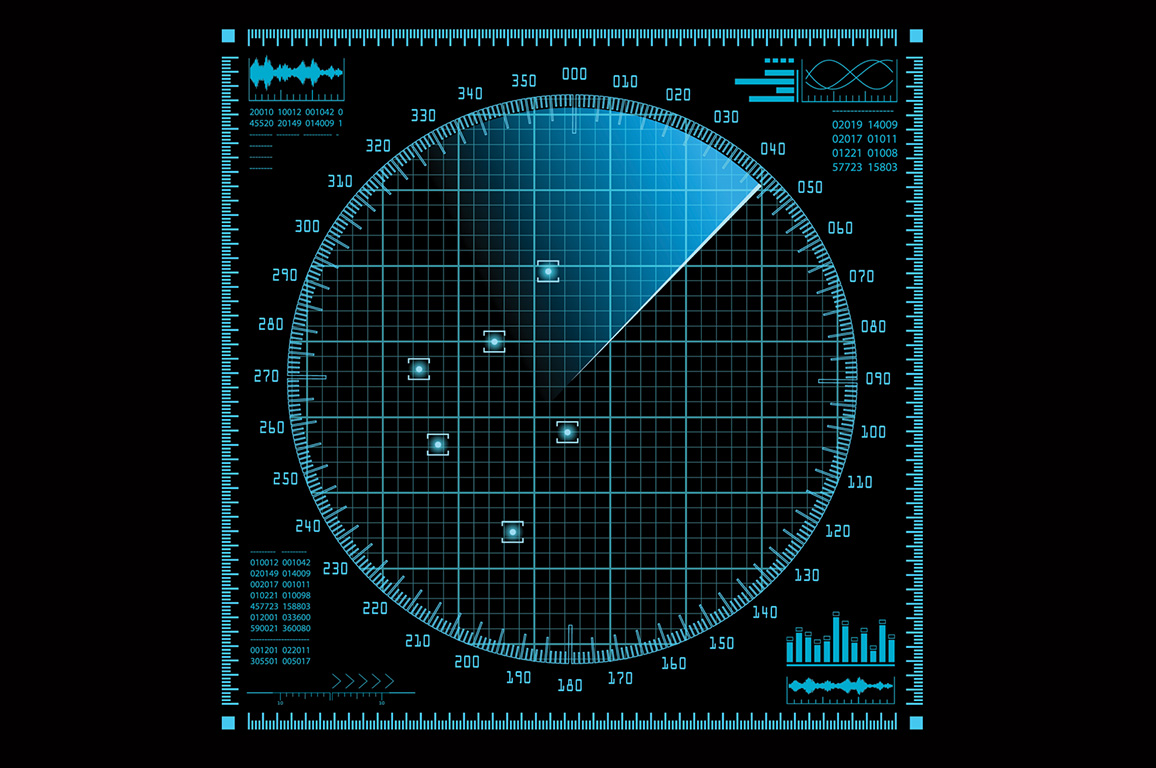 Radar systems are complex but the below section will explain the three main radar types in simplistic terms for ease of understanding. The choice of a drone radar will depend on the detection range requirements, location, size of the facility to be protected, and the capital outlay.

Active Radar:  A conventional radar uses a rotating antenna to sweep the sky, sending out radio pulses and detecting those which are reflected back from objects such as aircraft or drones. By measuring the time taken for the reflected signal to return, and its frequency shift, it is possible to determine the range, position and speed. To be effective at long range, radar systems require high power, often in the megawatt range. Active radars are more costly than passive and compact radars.

Passive Radar:  Unlike an active radar, a passive radar system does not emit a radio wave but receives transmitted signals from other sources such as commercial broadcast and communications signals.  When the signal it is receiving, is interrupted or reflected by an aircraft or drone, it causes a time delay between the arrival of the original broadcast signal and the reflected signal at the radar’s receiving antennae.  By measuring the time difference, the frequency shift, the direction of the signal, the objects location, heading and speed can be calculated. Compared to active radar, passive radars have a lower procurement cost, lower maintenance costs due to the lack of transmitter and moving parts, are physically small and hence easily deployed in places where conventional radars cannot be, and lower operating costs as it relies on signals already in the air.

Compact Surveillance Radars: Compact surveillance radars have been traditionally used for the detection of ground targets.  However, they have been enhanced by some manufacturers to specifically detect drones at ranges of 700 meters and across a wide field of view.  These compact surveillance radars are cost effective, light weight, and compact which permits them to be mounted in many locations. However, they have limited range and capability and will not be suited to all facilities or locations.

The challenge for aircraft radars is that they are designed to detect large, fast moving objects, not drones with a small profile, that are flying slowly, and at low altitude.   Drone radars are challenged with differentiating between a bird and a drone that results in false positives.

Acoustic sensors listen to the surrounds and detect the unique sound signatures of drones.  Once a sound is detected it is compared to a database of existing sounds to identify the drone type and sends an alert to security via a text, email or an integrated security system. Acoustic sensors are useful where other detection equipment, such as radar or RF, are ineffective.  Acoustic sensors are cost effective and their systems are user friendly but would not be suitable as a standalone solution, rather part of an integrated drone detection system.

The challenge with acoustic sensors is that they rely on a library of sounds emitted by known drones, and if the library is not up to date it will not detect. Maintaining an up to date sound library in the developing industry is a real challenge and will never cover 100% of drones that might operate at any given time. 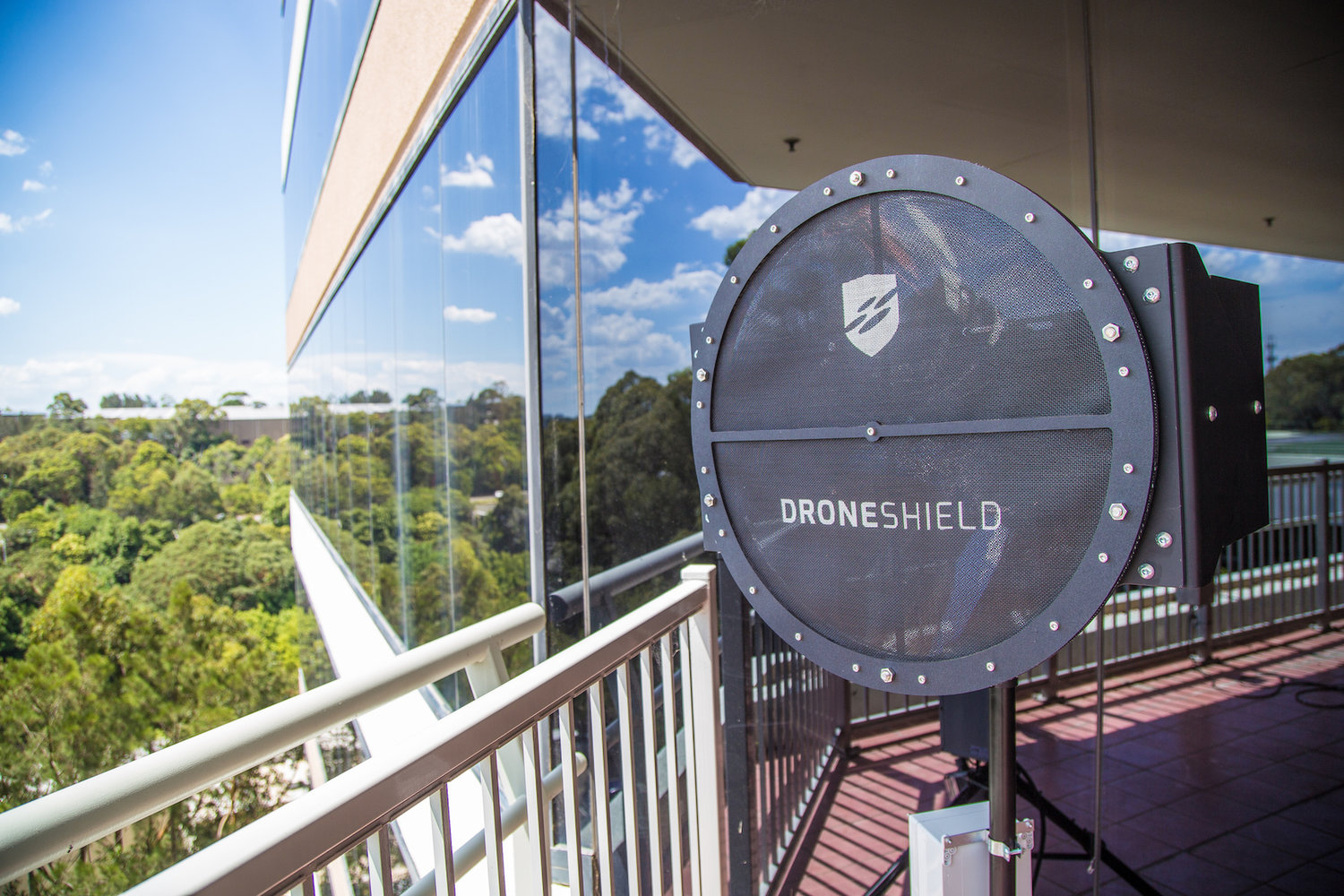 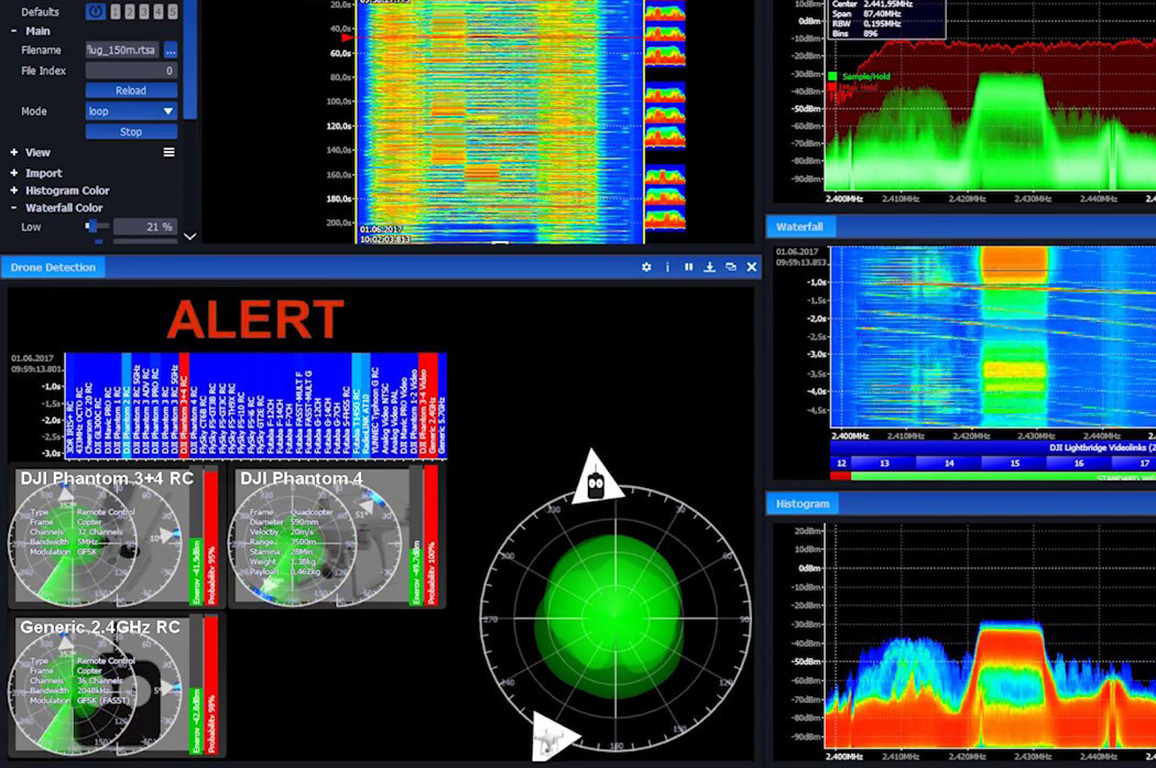 The radio frequency spectrum is divided into a number of frequency bands which specifies the general purpose and use for each band. Drones predominantly operate on the ISM band (industrial, scientific, and medical) which is internationally reserved for the use of radio frequency (RF) energy rather than for communications.

Drones operate in different parts of the ISM radio spectrum depending on the type of drone, the command link, video link or range extender being used.  Common off the shelf drones use command and video download links that operate on the 2.4 GHz and 5.8 GHz radio frequency.  However, there are drones that use 433 MHz, 900MHz and 1.2 GHz for video download or long range flight.

To detect these drones, a radio frequency (RF) system , such as a spectrum analyser or software defined radio,  is used to monitor the radio frequency spectrum to detect the command and control (C2) links between the controller and the drone and/or the downlink video link from the drone to the controller. Once detected, some of the more advanced RF systems can also identify the manufacture and type of the drone which can be useful in threat assessments and counter drone options.  Many RF systems will simply report a detection somewhere within its range, or within a sector, whereas a system with a multiple antenna solution, can use triangulation to identify the geographical location of the drone and potentially the controller.

Because drones can operate autonomously with no communication to the controller, RF detectors are not always able to detect them and therefore an integrated system is more reliable.

Electro-optical systems detect based on a drones visual signature.  Some optics systems include the ability to scan the sky, looking for variations in pixels, that could represent the presence of a drone.  Like radar systems, they sometimes detect birds and these false positives need to be quickly discounted to ensure a true risk is identified.

Whilst systems can detect drones, identification may be an important factor if you need to determine whether the drone poses a threat or is carrying contraband. There are many camera systems on the market that are integrated into drone detection and counter drone solutions to aid in the identification of the drone.

The image resolution and range of these cameras is based on the quality of the optics which is linked to cost. 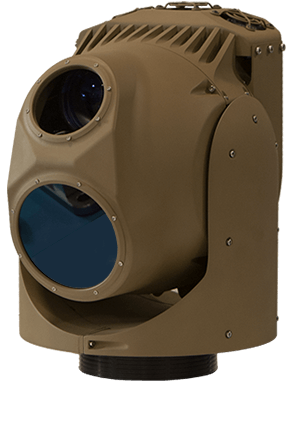 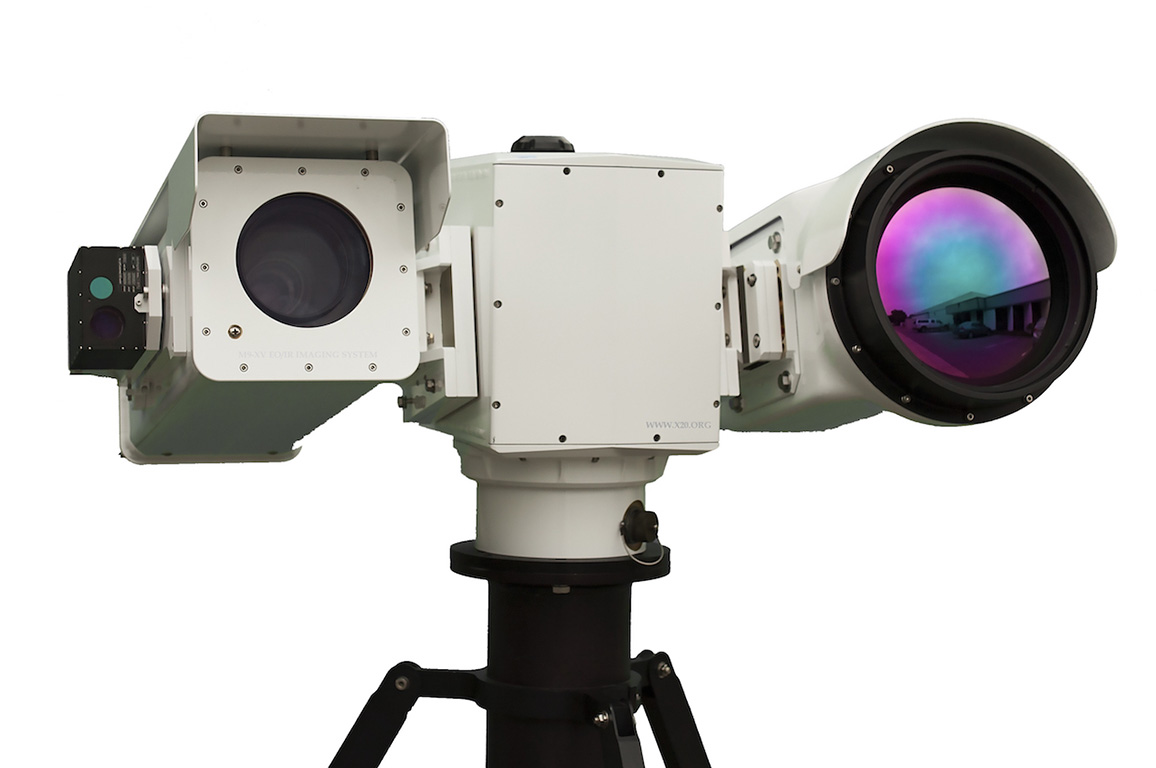 Drones fly in day and night time conditions and therefore we need a solution that can detect them at night and even in complete darkness. Infrared cameras detect drones based on their heat signature.  The more heat an object produces, the more thermal contrast it generates, and the easier it is to see. Because of this, infrared imaging even functions in zero-light conditions. It also has extreme long-range capabilities, making it ideal for drone detection.

The quality of the optics, detection capability, and effective range are all linked to cost.  A infrared solution would not normally be used in isolation, but rather as a part of an integrated solution.

Many systems integrate a variety of different sensors so they provide a more robust detection capability.

The use of multiple detection elements will increase the probability of successful detection, given that on individual detection system is entirely fail proof. 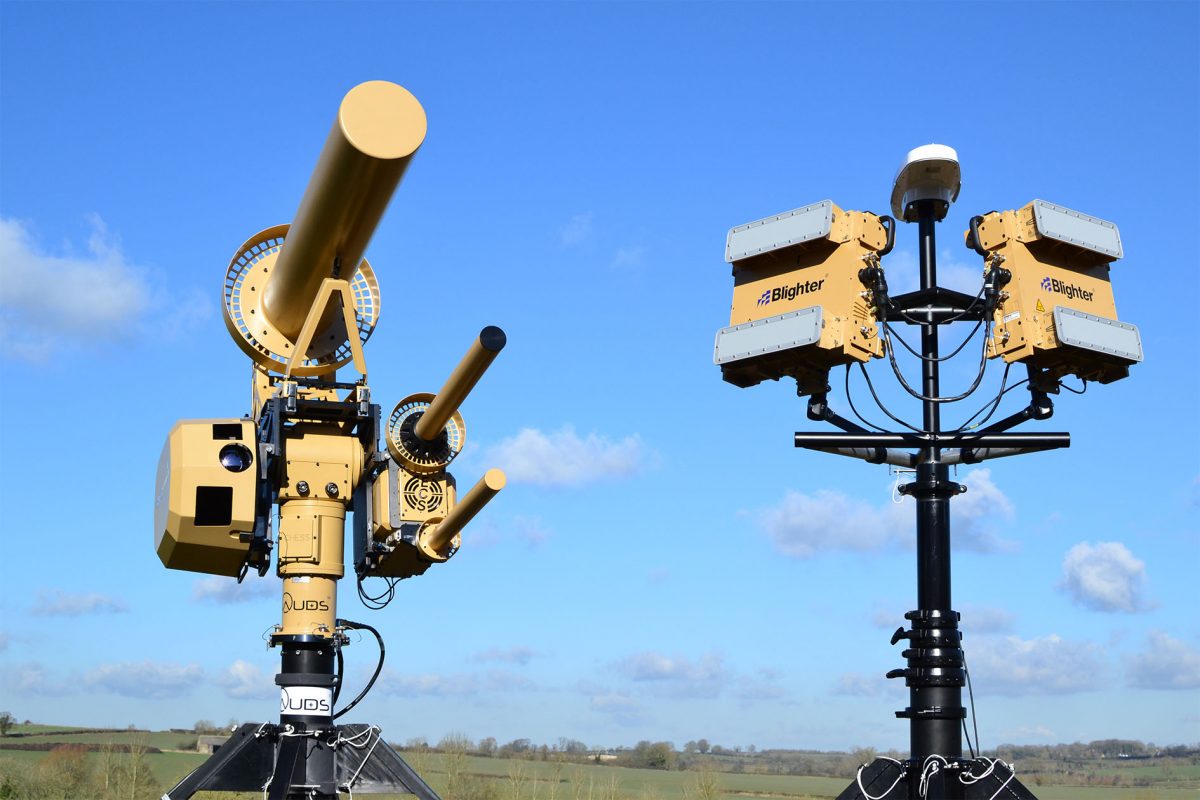